As a part of my honours thesis and for the love of all things worth eating, drinking, and experiencing, this is Savour SA - a friendly place where appreciation for quality South Australian food and drink abounds. Feedback is welcomed - heck, it's even encouraged! Some of it will be bundled up as part of my research. So, let us eat, drink, and be heaps merry.

I’ve lived in and around this smokey valley town for more years than I haven’t. It’s a few winding corners away from Adelaide CBD but as any Adelaide Hills dweller knows, these little villages are worth the drive. Lobethal isn’t as conventionally attractive as some of the towns (I’m looking at you, Stirling) but… I love it.
There’s only a few months each year where Lobethal isn’t cocooned in the smoke from wood fires. Usually March is one of those, but on this 16°C day, the smoke has settled in for the night. On descent into Lobethal, peering through the faux clouds, and just to your left as you turn up Main Street, you’ll find the Haus that Bier built. 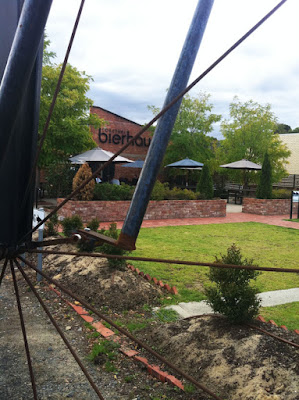 Part of the old woolen mill complex, you can’t tell from the outside that this Haus is built by Bier. It looks suspiciously brick. This is because it is. To know that this is the Haus that Bier built you must go inside.
In the Haus that Bier built the ceilings are high, and on this particular Friday evening, so are the spirits. Despite the mass of space, the Bierhaus is cosy and downright chipper. Even the walls are warm in ale yellow and a green that's like moss growing on bricks, and are adorned with sepia prints. Empty stubbies and longnecks sit atop the walls like an earthy glass cornice. Massive shiny robot vats sit on the right, behind glass, and inside them is where the beer bubbles, and squeaks, and sleeps. It’s as fascinating and mysterious as Willy Wonka’s factory, except with beer instead of chocolate, and fun mature grown ups instead of annoying fat kids. 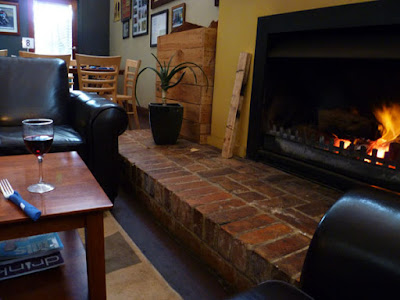 On smokey Friday my man friend and I were lucky enough to nab the prized couches by the fire. You can spend a lot of money here at the Bierhaus if you want to. There’s always something extravagant on the menu – like duck in sexy sauce, or a steak served with potato mashed by fairies. There are local pinots and blancs and other yummy drops. You can spend a penny, but you don’t have to. Often I’m just happy with the soup. Or salted chunky chips. Or dips. Or the fiery Buffalo wings in all their messiness. 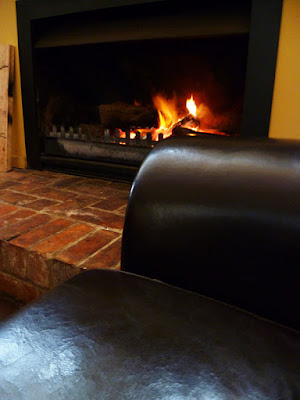 Hefeweizen by philsner, porter by stout, and ale by pale, the Bierhaus is built. And the Haus that Bier built houses some of the most delightful artisan beers in the state. They're clean, or they're vanilla, or they're malty, or bitter - these are drinks in glasses that clink, that live in the Haus that Bier built. You don’t have to be a beer-drinker to know that what the Bierhaus offers is good. And you don’t have to be wearing beer-goggles to see that the brewing bandits love what they do.

While the fire crick-crackles, and the piano man plays his bluesy rendition of Colours Of The Wind (sans raccoon), you soon discover that it’s always beer-drinking weather when you’re sitting close enough to the fire. The Haus that Bier built? It’s the Lobethal Bierhaus - a quality establishment I unashamedly love. There's a small town charm to this big-flavoured brew Haus. And in my opinion, you should heaps hops to it. 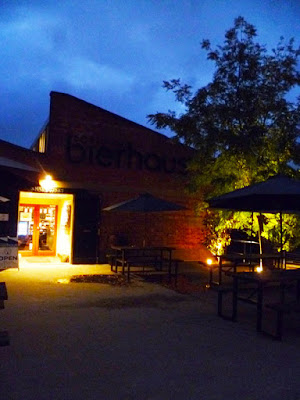